The post-race Jerez Test gave Marc Marquez and Jorge Lorenzo a chance to explore a number of potential setup options and development parts for the Honda RC213V.

After claiming his second win of the 2019 season, Marc Marquez and the Repsol Honda Team immediately got back to work at the Circuito de Jerez – Angel Nieto. First on the list to test was the development Honda RC213V ridden by Stefan Bradl during the weekend. Setting a 1’37.260, Marquez leaves Jerez seventh fastest in the test.

For Jorge Lorenzo, the test provided more important kilometres aboard Repsol Honda Team machine. He suffered a small crash at Turn 6 just before 16:00 local time but was able to return to testing shortly after. His test was brought to an end by a second crash at Turn 7 as the flag came out. Completing a total of 93 laps, Lorenzo concluded the test in ninth place with a best time of 1’37.466.

The Repsol Honda Team and riders now return home briefly before heading out to the French GP at the Le Mans circuit, May 17 – 19.

The 2019 pre-season has been different to any other before it for reigning MotoGP™ World Champion Marc Marquez after a substantial shoulder operation in early December.

Surgery was performed by Dr. Xavier Mir, Dr. Victor Marlet and Dr. Teresa Marlet at the Hospital Universitari Dexeus in order to resolve a recurring dislocation of Marc Marquez’s left shoulder. The issue had persisted throughout the 2018 season, and the winter break was deemed the only time possible to operate on the Repsol Honda Team rider. With recovery predicted to take multiple months, Marquez and his team set about building a plan to strength the shoulder and prepare for the Sepang Test on February 6 – 8.

Hours of work with his physiotherapist Carlos J. García and highly targeted training in the gym became Marquez’s new winter routine. But, the seven time World Champion kept his focus, pushing to be as fit as possible for Malaysia.

The goal of returning to racing his Honda RC213V remained his motivation throughout and each week offered a new milestone. First, being able to use his shoulder in every day life, ride a mountain bike and then return to training with motorbikes. A practice bike would be the shoulder’s first test of 2019 and on January 29 – just under two months after his operation – Marquez was back.

With some trepidation, Marquez rolled onto a track in Alcarràs, near his home in Cervera, to see if the shoulder was ready for the demands of a bike.

“I needed this!” beamed Marquez after his first run. “I touched my elbow on the ground! Riders in general need to have their minds clear. At least on the trip to Malaysia, which is 14 hours long, I will be thinking I have ridden a bike, got on the brakes, felt the throttle and the clutch. We have done a few laps that have helped me to see where things are. This week we have to work on it. It was pretty much what I expected, the large force under braking – especially left-handers, where I have to support my left shoulder was problematic. That is where we have to continue working, have patience in Malaysia and get to March at full fitness.”

Now the attention turns to the Sepang Test on February 6 – 8 when Marc Marquez and the Honda RC213V will meet again as they prepare to defend the Triple Crown.

The MotoGP riders completed the second and final day of testing during the last testing session of the year at Jerez de La Frontera in Spain, with Marc Marquez second fastest and just 0.025” off fellow HRC rider Takaaki Nakagami.

Marc and Jorge Lorenzo took advantage of another day in ideal weather conditions to continue their preparation for the new season. Marc set his fastest time of 1’37.970” on lap 53/56. Meanwhile, Jorge finished a very positive fourth with a time of 1’38.105” on his 65th –and final–lap.

It has been a long and successful racing season for the Repsol Honda Team, and the preparation for next year has got off to a positive start. Testing will resume after the winter break, when Marc and Jorge are back on the track in Malaysia, on 6-8 February 2019.

Dani Pedrosa completed his racing career in Valencia, scoring a fifth-place finish in incredibly tricky weather conditions that caused the crashes of nine riders—2018 World Champion Marc Marquez among them—and prompted Race Direction to interrupt the first race on lap 13 and re-start a new one half an hour later.

Marc suffered a crash from third place at Turn 9 on lap seven and was therefore unable to take part in the second stint. Dani restarted from fourth in the 14-lap second race and closed fifth, bringing to 46 points the final advantage with which the Repsol Honda Team secured the Team Championship, thereby earning back-to-back MotoGP Triple Crowns, having already achieved the Riders Title in Japan and the Constructors Title in Malaysia. He commented:

“For sure I had a particular feeling before today’s race, knowing that the moment of my final race had arrived. Well, actually it turned out that I had two! Unfortunately the weather was really tricky. In both races, I struggled so much with the rear and couldn’t really get on the gas. I was actually expecting to have a better feeling in the second race, as there was less water on the track. But we changed the tyres and I had no grip, so I could only try and finish the race with no crashes. It’s a bit of a shame, but when I got back to the pits, I found everybody waiting for me—the team, my family, my people—and there was a very emotional atmosphere. I was pleased to see their emotion. It meant a lot to me. Now I’ll have several events to attend, but after that I’ll try and have some time to myself and relax a bit before next year.” 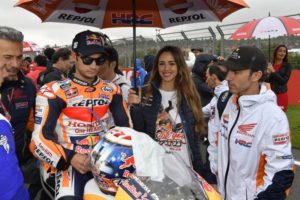 After celebrating at the FIM MotoGP Awards ceremony on Sunday evening, the Repsol Honda Team will start 2019 winter test season on Tuesday, with a two-day test.