In ‘Leon Camier: A Life Behind The Bars’ the British WorldSBK star talks candidly about how his love affair with motorcycles began and how it sowed the seeds for a career as a World Championship racer.
Shot on location in and around Camier’s home in Andorra, the video also provides insight into what drives the Honda World Superbike rider, his other passions and how he maintains both his mental and physical edge when he’s away from the circuit.

The Red Bull Honda World Superbike Team heads to France’s Circuit de Nevers Magny-Cours this weekend and is targeting a return to form at the final European round of the 2018 season.

After a challenging round last time out at Portimão, Leon Camier and Jake Gagne are aiming for more consistent performance on their CBR1000RR Fireblade SP2 machines in France.

Camier is a fan of the French circuit and after some notable performances there in recent years, the Briton is confident of a resurgence this weekend. Gagne is also in high spirits as the American has shown strong race pace and has prior track experience of Magny-Cours after being drafted into the team for the French round last season.

Magny-Cours is defined by a mix of slow hairpin corners and quicker chicanes and sweeping corners. Overtaking opportunities aren’t as widespread as at some other circuits, although the Adelaide hairpin after the very fast first sector is one prime overtaking spot.

The eleventh round of the WorldSBK championship commences with Free Practice 1 at 0945 local time (GMT +2) on Friday. Race 1 will start at 1300 local time on Saturday, while Race 2 on Sunday kicks off at 1515.

After claiming his first ever WorldSBK top-ten finish in Race 1 yesterday, Gagne lined up in P15 for today’s race and in carbon-copy style to yesterday, showed great pace in the early laps on his CBR1000RR SP2.

Gagne worked his way up into the top ten by lap five and maintained a strong pace throughout the second half of the race, bringing his Fireblade over the finish line with an emphatic wheelie in ninth place.

For Camier, it was another frustrating race with the Briton crashing at turn 2 on the third lap, however he recovered brilliantly to catch up to the pack and made several passes to ultimately finish in the points in P13.

With five rounds remaining in the 2018 WorldSBK season, Camier is twelfth place on the championship table with 75 points while Gagne is in seventeenth place with 37 points.

The Red Bull Honda World Superbike Team will next be in action at the Pirelli Riviera di Rimini round at Misano Circuit from July 6-8.

The Red Bull Honda World Superbike Team head to Laguna Seca this weekend where hometown hero Jake Gagne returns to the circuit he made his WorldSBK debut, while Leon Camier gets his first chance to ride the legendary American circuit on the CBR1000RR Fireblade SP2.

At approximately 3.61 kilometres (2.223 miles) in length, the Laguna Seca circuit is the shortest on the WorldSBK calendar however packs numerous challenges within its 11 corners, including the ultra-fast Turn 1 and the world-famous Corkscrew which plunges almost twenty metres from entry to exit.

This circuit is where Gagne made his WorldSBK debut with the Red Bull Honda World Superbike Team in 2017 where the American rider grabbed a pair of point-scoring finishes in a fine performance. With half a season of WorldSBK racing experience now under his belt, Gagne is aiming for his best race weekend of the year at a circuit he loves.

For Camier, the Laguna Seca round comes off the back of strong performances at Donington and Brno and with the summer break fast approaching, the British rider is aiming to move closer to the front runners at a circuit where the sublime handling and braking stability of the Fireblade should prove advantageous.

The WorldSBK action at the United States round starts this Friday at 0945 local time (GMT -7) with Free Practice 1. Race start on both Saturday and Sunday is at 1400 local time.

Camier started Race 2 in P6 on the grid but needed a couple of laps to find his feet, settling into P9 in the opening laps. As other riders struggled in the warm conditions, Camier adapted and was able to improve his pace to work his way ahead of his competitors and climbed to seventh place with five laps remaining, the position he held until the chequered flag.

Further back, Gagne got a good start from the seventh row of the grid and quickened his pace as the race went on, setting his quickest lap of the race on lap 9. A last lap push nearly brought the American his first top-ten finish in WorldSBK, but ultimately he just missed out although he still equalled his best result of the year with P12.

The Race 2 result sees Camier move up one place in the championship standings to tenth on 72 points, while Gagne stays in seventeenth overall but increases his points tally to 24.

The United States hosts the next WorldSBK round at Gagne’s home circuit of Laguna Seca from June 22-24.

The Czech Republic returns as a host nation for the FIM World Superbike Championship for round 7 this weekend, with Red Bull Honda World Superbike Team riders Leon Camier and Jake Gagne relishing the chance to ride the undulating Automotodromo Brno circuit again.

The Brno circuit is a technical 5.4 kilometre track characterised by its huge elevation changes where the difference between the lowest and highest points of the circuit is over 70 metres – the height of a twenty story building. These elevation changes, coupled with many left-right corner combinations split by a series of straights – including the steep, uphill straight in the last sector colloquially known as ‘Horsepower Hill’ – make the track a stern test for man and machine.

Camier has ridden the circuit numerous times during his illustrious WorldSBK career and although the Briton is still not 100% fit following his injury, given the progress he made during the Donington race weekend he is positive about maintaining his momentum on the CBR1000RR Fireblade SP2 this weekend at one of his favourite circuits.

Gagne has fond memories of the Czech circuit, with the American having won a race here during his time in the Red Bull Rookies Cup and is confident that his riding style and the sharp handling and braking stability of the Fireblade will help him secure a good result this weekend.

The first WorldSBK session of the #CzechWorldSBK round is Friday’s Free Practice 1 at 0945 local time (GMT +2). Race One and Race Two are set to start at 1300 on Saturday and Sunday respectively. 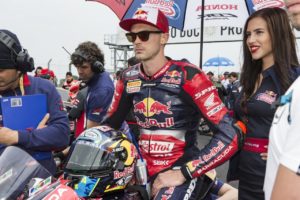 The Red Bull Honda World Superbike Team are aiming to get their season back on track this weekend as Leon Camier and Jake Gagne prepare to take on the fast and furious Donington Park circuit for round 6 of the FIM World Superbike Championship.

A rigorous recovery regime following his accident in round 3 wasn’t enough to allow Camier to race at the previous round at Imola, however following another two weeks of treatment, the British star is in better physical condition heading into this weekend. Camier is hopeful of completing the whole race weekend, however the real test to gauge his fitness will come during Friday’s Free Practice sessions around the 4 kilometre (2.49 mile) long Donington circuit.

Fronting the other Fireblade, Jake Gagne is facing the challenge of yet again visiting a circuit he hasn’t raced at previously, however the American rookie has proven this season that he is a quick learner on the CBR1000RR Fireblade SP2 and he aims to be back in the points this weekend.

The Donington Park Circuit is a track of two distinct halves, with the first section comprising fast, flowing corners and elevation changes through sections such as Hollywood and the Craner Curves, while the second half is exemplified by flatter, tighter sections like the Fogarty Esses and Melbourne Hairpin.

Action starts at the Donington WorldSBK round with Free Practice 1 at 0945 local time (GMT +1) on Friday with Race 1 on Saturday starting at 1315 on Saturday and 1300 on Sunday.

The fast and famous TT Circuit Assen hosts round four of the 2018 WorldSBK season this weekend where Jake Gagne will lead the charge for the Red Bull Honda World Superbike Team at their home race.

For Gagne, Assen is one of the venues on the WorldSBK calendar where he has enjoyed previous success, with the American rider winning a Red Bull Rookies race at the 4.5 kilometre long circuit in 2010. More recent experience came in the form of a private test at the circuit with the team last month, meaning Gagne is well prepared heading into the weekend.

The first session of the Assen WorldSBK round, Free Practice 1 starts at 0945 local time (GMT +2) with the two races taking place at 1300 local time on Saturday and Sunday. The current weather forecast suggest fine and warm weather for the entire race weekend.

Red Bull Honda World Superbike Team’s Leon Camier capped off a strong showing in Thailand with a sixth place finish at Chang International Circuit, while Jake Gagne was back in the points after taking fourteenth place on the CBR1000RR Fireblade SP2.

Camier started on pole position in Race 2 courtesy of his fourth place in Race 1 and although he got the holeshot and led into the first corner, a fierce battle in the lead group resulted in him ending the first lap in P5. Showing consistent pace throughout the race, Camier was embroiled in the fight for the top five with Jonathan Rea and Xavi Forés and although he closed in on Forés in the final laps, he ultimately finished in sixth place.

Bouncing back after a tough race yesterday, Gagne had a strong start and in the opening exchanges fought his way up to ninth position. As the contest entered the final stages, Gagne found himself caught up in a five way battle for the top ten and despite a valiant final push was unable to make up positions and ended the race in P14.

After two rounds Camier is eighth in the WorldSBK standings on 42 points, while Gagne is sixteenth overall with 9 points. The series now heads to Europe where the Red Bull World Superbike Team will contest the Aragon WorldSBK round on April 13-15.