Continuing his run of two top finishes, Marquez took important steps towards his ultimate goal as a determined Lorenzo finished in the points on his return from injury.

The British summer continued in full force on Sunday as round 12 of the 2019 MotoGP World Championship at the Silverstone circuit enjoyed 31°C ambient temperatures. With circuit temperature at 44°C when the lights went out, it was set to be another demanding premier class race. 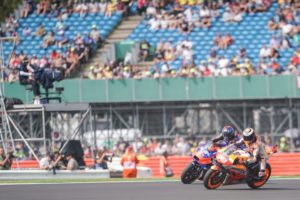 From the 88th pole position of his Grand Prix career, MotoGP World Championship leader Marc Marquez made a perfect start aboard his Repsol Honda Team RC213V and avoided the incident behind. With championship rival Andrea Dovizioso and potential podium contender Fabio Quartararo out of the race, Marquez was joined by Alex Rins at the front as the duo swapped fastest laps for most of the race.

The pair played a game of cat and mouse until the final lap, Marquez having led the entire race and setting a new race lap record of 1’59.936. A front-end moment in the last corner caused the World Championship leader to close the throttle and as a result was forced to settle for second place, missing the win by just 0.013s. Continuing his run of top two finishes in 2019, Marquez leaves Silverstone with a dominating 78 point lead in the MotoGP World Championship with seven races left.

Taking the 88th podium of his premier class career, Marquez draws level on premier class podiums with the great Giacomo Agostini. The result moves Honda to 45 points clear of Ducati in the Constructor Championship and brings the Repsol Honda Team to within 36 points of the Ducati Team in the Team Championship. 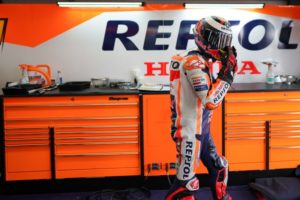 Knowing his physical condition, Jorge Lorenzo entered Sunday’s British Grand Prix with the simple aim of finishing the race to further understand his fitness level. The five-time World Champion’s determination was rewarded with a pair of points in 14th place as he profited from a consistent approach and the mistakes of others ahead.

Six-time World Champion Jim Redman, winner of Honda’s first premier class race in 1966 on the Honda RC181, was also in attendance and enjoyed talking racing with Marquez and Lorenzo.

Now the Repsol Honda Team will travel to the Misano Circuit for a two-day test. Racing resumes at the San Marino GP, September 13-15, at the same circuit. 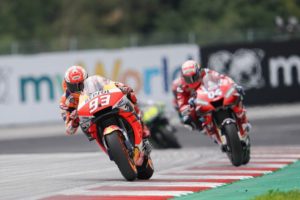