Marc Marquez (Repsol Honda Team RC213V) roared to his third consecutive MotoGP victory yesterday at sun-soaked Le Mans to boost his quest for a fifth MotoGP World Championship crown in his sixth season in the premier-class.

This latest success for the 25-year-old Spaniard is his 38th MotoGP victory, which moves him to fifth equal in the all-time winners list, alongside Honda’s 2011 MotoGP World Champion Casey Stoner, with only Jorge Lorenzo, Mick Doohan, Giacomo Agostini and Valentino Rossi ahead of him.

Marquez made a steady start to the race, completing the first lap in fifth position, then waited until his tyres were delivering optimum performance before he began pushing towards the front. Marquez now holds a 36-point championship lead over Maverick Vinales, who won last year’s French GP but finished seventh yesterday. 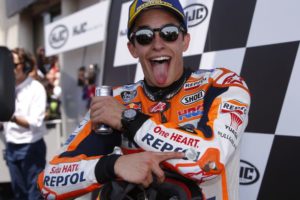