Marquez lit up the Qatar night with second place after a race-long brawl as Lorenzo worked his way up to 13th place. 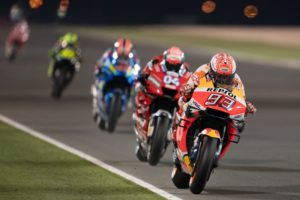 With Warm Up held in the late afternoon and still under the daylight, it only offered the Repsol Honda Team a brief chance to confirm their settings ahead of 2019’s opening Grand Prix. As the sun set and the floodlights flickered to life the ambient temperature settled at 18ºC with the track at 19ºC. 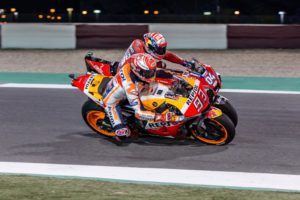 Marc Marquez held his own in the opening laps, keeping out of trouble and moving ahead of the chasing pack with Andrea Dovizioso. The reigning World Champion was soon joined in his hunt for victory, a frantic melee between the leading seven riders playing out over the next 20 laps. Just 0.023s split Marquez from Andrea Dovizioso as they crossed the line, Marquez opening his 2019 account with 20 points.

After yesterdays pair of heavy falls, Jorge Lorenzo’s Repsol Honda Team debut was heavily restricted by lingering pain in his back and shoulder. Focusing on his own rhythm and understanding the Honda over race distance, Lorenzo battled to 13th to earn three points on his debut.

The MotoGP™ World Championship now prepares for Round Two at the Argentina Grand Prix, March 29 – 31 hosted at the Termas de Rio Hondo Circuit.