Marc Marquez becomes first repeat premier class winner of 2019 as he storms to victory in Jerez, Jorge Lorenzo returning to the points. 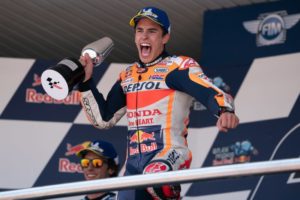 Leaving the fall of Warm Up behind him, Marc Marquez stormed off the line to lead the 23-rider field through the opening corners. Lap eight saw Marquez open a gap and begin to break away at the front, steadily building an advantage with each corner. The dominant ride saw the reigning World Champion cross the line 1.654 seconds ahead of second place after celebrating across the line in the 300th MotoGP race.

His 46th win in the premier class, and 72nd across all classes, moves Marquez to the top of the championship table with 70 points, a point clear of second placed Rins. His 1’38.051 on Lap 15 of the race secured Marquez a new race lap record at the Jerez circuit along with his 25 World Championship points. He also becomes the third most successful Honda rider, overtaking Jim Redman who claimed 45 wins and overtakes Lawson to become the sixth most successful MotoGP rider in terms of premier class podium finishes with 80.

Jorge Lorenzo was left wanting more as he crossed the line in 12th at the Spanish GP. It proved a difficult race for Lorenzo who is still working on perfecting the setting of his Honda. Monday’s test day offers Lorenzo and his team an opportunity to deepen their understanding of the bike and regroup ahead of the French GP.

With 76 points, Honda sit atop the Constructor Championship.

The Repsol Honda Team will take part in the official post race test at the Jerez Circuit on Monday, May 06 before beginning their preparations for round five – the French GP, May 17 – 19.