Marc Marquez was crowned the 2019 MotoGP World Champion in the only way he knows how: with a thrilling race win delivered at the final corner. 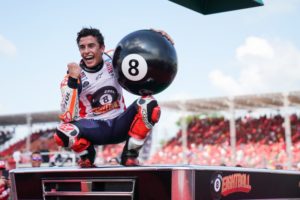 A full house at the Buriram Circuit were treated to an edge of their seats MotoGP race as they witnessed Marc Marquez crowned World Champion for the eighth time. From the front of the grid, Marquez charged forward and immediately began to chase pole setter Fabio Quartararo. With his only title rival, Andrea Dovizioso, a distant fourth Marquez was able to focus solely on the race win. 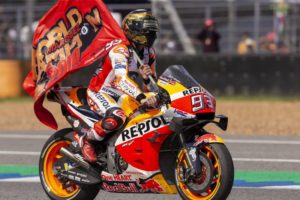 After trading fastest laps, the pair settled into their rhythm and Marquez waited for his moment to attack. The final laps were explosive as the 2019 MotoGP World Champion launched an all out assault on the young French rider, moving ahead as the last lap began. But it would go down to the final corner, Marquez expertly defending from Quartararo in the last corner to take the 2019 MotoGP World Championship in style. 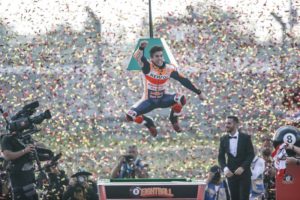 With 325 points, nine wins, 14 podiums, nine poles and 10 fastest laps – Marc Marquez becomes the MotoGP World Champion alongside the Repsol Honda Team for the sixth time and takes the eighth World Championship of his career. The victory is also Honda’s 150th in the MotoGP class – an achievement no other manufacturer has been able to match. 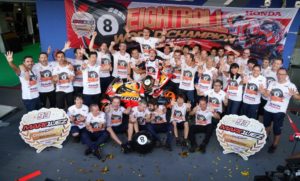 Jorge Lorenzo suffered a difficult race, unable to improve his feeling in the hotter conditions. Ultimately crossing the line in 18th, Lorenzo is looking ahead to the next race in Japan where he hopes to improve his current feeling and results.