Ricky Brabec and Kevin Benavides were the fastest names among the Monster Energy Honda Team riders as the Dakar Rally made its maiden outing in the Middle East. The American rider, placing second, and the Argentinean, in fourth, shone in the opening 2020 Dakar stage.

Two of yesterday’s most photographed protagonists at the starting podium in Jeddah, which got the 2020 Dakar Rally underway, turned out to be Ricky Brabec and Kevin Benavides. Both featured in the battle for the win in the opening special, and although their starting positions on the day proved unfavourable for the win, the two riders did, however, eventually post excellent final positions.

Riders made a very early start this morning from Jeddah, riding the first 195-kilometre liaison section along the coast of the Red Sea, to dispute the opening 86-kilometre special amid canyons and dried-out river beds.  After a 19-kilometre neutralization section, competitors faced a 213-kilometre timed special. Before arriving at the first bivouac in Al Wajh, in this new chapter in Dakar Rally history, participants had to complete a further 237-kilometre link section. It was a tough trek, requiring some deft navigation due to the multiple parallel tracks on a course which took in hard, stony terrain as well as the first dunes. The sand, although not significantly high, made its appearance at kilometre 27.

Ricky Brabec began the Dakar 2020 at white-knuckle pace, intent on building on the fine work done in the previous edition. The American registered notable times in the earlier stages to eventually take the stage’s second fastest overall time.

Kevin Benavides was also setting an infernal pace, showing that he clearly intends to be among the frontrunners this year, posting fourth fastest time at the end of the special, but citing good sensations on such a tough opening to the rally.

Meanwhile, Joan Barreda, in stark contrast to last year’s rally, was taking things cautiously, knowing full well that today’s start order was not the most favourable to his strategy. The Spaniard will now await the most opportune moment to pounce after finishing the stage in seventh. It was also a noteworthy stage for Chilean rider José Ignacio Cornejo, who recorded fine partial times to post eleventh overall.

South African Aaron Maré got his maiden Dakar adventure underway with a fall early in the special. The Monster Energy Honda Team newcomer came off onto the rocks, taking a blow to the hand, but he will take the tomorrow start. Maré battled on to eventually finish the stage in thirty-fifth place.

Monster Energy Honda Team are all set and ready to tackle tomorrow’s Super Marathon stage, which will see the bikers chalk up some 890 kilometres over the two legs.  Top of the agenda will be taking care the mechanics and main elements of the bikes, given that mechanical assistance is totally forbidden. 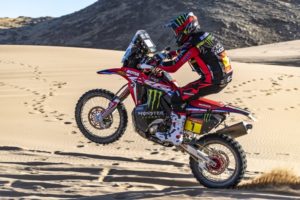 Mostly made up of tracks, this day’s challenge is technically accessible. But you start to get a feel for what makes Saudi navigation particularly difficult. It is time to learn to trust new landmarks, when multiple tracks lead to confusion. For bikes and quads, this is also the first part of the “Super Marathon” stage.