A 9.8 second victory for the untouchable Marc Marquez in Argentina as Jorge Lorenzo gains more points and crucial bike time. 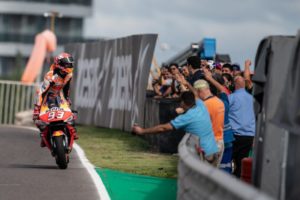 Overnight rain in Termas de Rio Hondo on Saturday didn’t deter the MotoGP field during morning Warm Up, both Repsol Honda Team riders running consistently in the top ten. Marc Marquez again finished on top, Jorge Lorenzo within a second and in 11th after the 20-minute session. 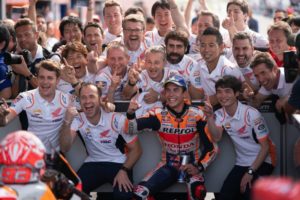 Forecasts were all proven wrong as the 25-lap Argentina Grand Prix ran without even a single drop of rain and instead the grid was met with ever-climbing track temperatures. A lightning start saw Marc Marquez convert his pole position into a one second lead after just a single lap, the reigning champion never once looking back. Lap after lap his advantage grew, Marquez over 12 seconds clear before the end of the race. Crossing the line 9.816 seconds ahead of second placed Valentino Rossi, Marquez claimed his first win of the season and his third win at the Termas de Rio Hondo circuit in untouchable style. 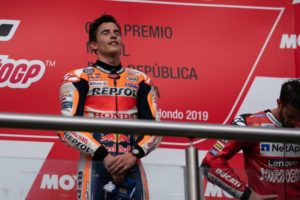 The victory was accompanied by Marquez’s biggest winning margin in a dry MotoGP race, his previous best coming at the 2016 Argentina GP (a gap of 7.679s) and is his 45th win in the premier class. Marquez leaves Argentina with 45 points and the championship lead.

Unfortunatley Jorge Lorenzo’s race got off to a difficult start as he dropped down to 21st from 12th after trouble getting off the line. However, consistent pace saw Lorenzo quickly return to points scoring positions and run at a pace similar to those fighting towards the front. Crossing the line in 12th, Lorenzo collects not only more points but also more race time on the Honda.

Honda now moves to the top of the Constructor’s Championship as a result of the victory.

The MotoGP World Championship prepares to travel to Austin, Texas for round three of the 2019 championship at the Red Bull Gran Prix of The Americas, April 12 -14. Marquez has won all six races at the circuit while Jorge Lorenzo has taken a pair of podiums previously.